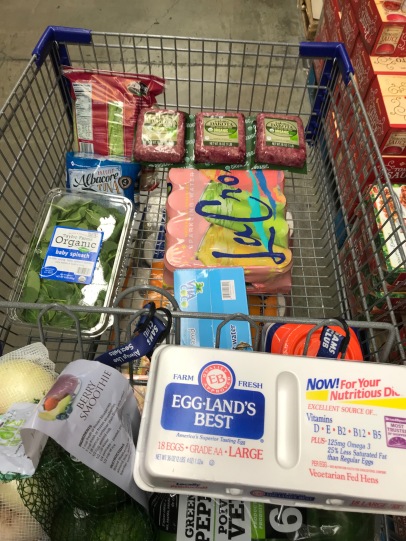 A few of my many purchases this week.

Yay! It’s the weekend! When it comes to the Whole30, that means absolutely nothing! Well actually, it means Biff (that’s my mans) doesn’t have to work and is helping me out in the kitchen. He’s a really good cook. I knew he was a keeper when, shortly after we started dating, he made stuffed chicken breasts and homemade pita bread out of the random stuff I had in my kitchen. I honestly didn’t even know I had chicken.

Today, I know exactly what I have in my kitchen. Mostly because I’ve gone to the grocery store every friggin’ day since New Year’s. This morning, I hit up the Sam’s Club to buy some of the items we’ve been using the most in bulk. (I know Costco is generally better, I am a mom afterall. But something about our local Costco brings out the worst in every human who steps foot in it. Actually, the behavior starts in the parking lot. I can’t.) I stocked up on peppers and onions and organic beef. One of the criticisms about the Whole30 is that it’s expensive to eat this way. It can be, and I’ve definitely blown my usual grocery budget this first week. But I think if you stick to a few staples and buy what you can in bulk, it’ll even out. I’ve also purchased a few things this week, like specialty salad dressing and mayo, that I could make much cheaper. The time savings make these worth their price tag for me.

I didn’t go to CrossFit today since I went 5 days in a row this week. I thought I might go to Barbell Club (like CrossFit, but focuses on weights/strength training) but it meets at 7:45am. I slept decently last night and wanted to revel in that (and my jammies) a little longer. Instead, we went for a walk as a family. Well, I walked, Biff did some skateboarding, and Atticus (that’s my 6-year-old) rode his bike halfway. I dragged it the other half.

For breakfast, Biff made some eggs over potatoes with bacon, avocado, onions and peppers. It seems like all of our breakfasts are a variation of this, but it works and we’re not sick of it yet. Plus I just bought 400lbs of peppers and onions at Sam’s.

Lunch was the same old green salad with tunafish we’ve had a few times this week as well. I realized part of the desire for a simple lunch stems from the fact that our good pans are usually in the dishwasher from breakfast (or sitting in the sink) at that time.

Biff tackled dinner as well, and took my idea of bunless burgers to the next level by adding bacon,  onions and peppers, avocado and Sk8er Boi love. We had potatoes and asparagus on the side.

So…takeaways from today: having a husband who cooks rocks; dragging a Spiderman bike counts as cardio; don’t feel the need to explore new recipes until you’re sick of the ones you have.

Days like today in January are why it costs a zillion dollars to live here.