It’s January 30th and that means I made it to day 30 of this Whole30. Well, technically I did cheat one day, so it’s not an official Whole30, but since this is my third(ish) time through, I think it counts. So in the words of Vicki Gunvalsen, Wooooohooooo!

I haven’t updated here for awhile because, well, things have been pretty routine. Cook, sweat, shop, sleep, repeat. We’ve been using our dehydrator a lot for fruit, which I think has saved us some grocery money. However, I’ve yet to find a good shopping routine. We plan to stick with this Whole30 way of eating for the foreseeable future (while allowing a cheat meal or drink once every two weeks) so I’m still eager to fine tune the shopping and spending. I was spoiled in California. Within 5 miles of our house we had several big chain supermarkets, two Trader Joe’s, two Whole Foods, a Sprouts and, my personal favorite, Whole365. I even went to Whole365 when we visited last November, for old time’s sake. Here, I have to drive about 20 minutes for Trader Joe’s and a little longer for Whole Foods. I can certainly find enough of what we like at the in-town supermarkets and the couple small, natural food stores. But the mark-up is all over the place. And don’t get me started on how hard it is to find a good avocado. 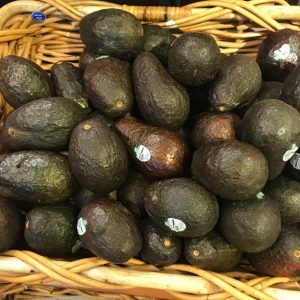 The good news is that’s forced me to try a few new recipes. On Monday I made this beanless chili recipe in the InstantPot and it came out great. On reheating, the sweet potatoes fell apart, but that didn’t affect the taste. I used ground beef instead of turkey and I doubled the Rotel. I also didn’t measure the spices because I like to live dangerously. I’ll definitely be making it again!

Pretty much the only thing I need to go to Whole Foods for is compliant dressings and mayo (yet somehow I always seem to spend $140 there…) so I think I finally have the kick in the pants I need to start making my own. Biff has been kicking around the idea of making another batch of Kombucha, but I’m ok with not having a living yeast culture on our counter.

So I’m off to workout and then to the grocery store today! Tomorrow I’ll weigh myself and maybe I’ll have a gluten-free cider to celebrate. And then, it’s right back into another Whole30!

Exercise: Some game my son made up with a Nerf football, walking into the bookstore from the parking garage
Food: Egg, Sausage and Butternut Squash Bake, Leftover Mini Meatloaves with Potatoes and Green Salad, Spiral Carrots with Beef Bolognese Sauce 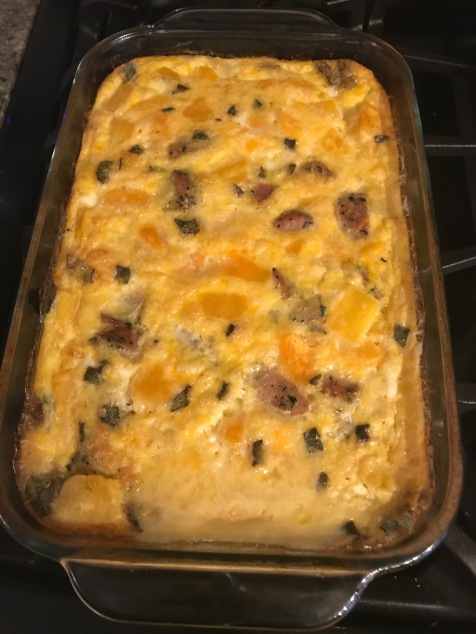 I thought the squash was uncooked eggs at one point.

We lived in Portland, Oregon for five years before moving to the Bay Area. And that was plenty of time to learn that Sundays are for brunching! Today, we had an inadvertent Sunday brunch. We all slept in until 8 (either we were so exhausted we slept through the cats howling for their breakfast, or they tided themselves over with fish from my son’s aquarium…hmm…) and then my son had swim lessons at 9. It was just enough time to have some coffee and find his goggles. While the fellas were there, I made an egg bake and we ate when they got home. I was impressed that I wasn’t too hungry while waiting, but I had an episode of Real Housewives to keep my mind occupied. I don’t know about you, but I don’t think this truce with Lisa Rinna is going to last. Of course, later in the day, I read that the Whole30 plan calls for having breakfast within an hour of waking up. Something about hormones. So we’ll just pretend I slept until 10.

My gym doesn’t offer CrossFit classes on Sundays (yet?) and I’ve gotten used to taking Sundays off from workouts. I’m eager to get back tomorrow though. My son goes back to school, and with the drop-off time and CrossFit class times, I can only make Monday, Wednesday, Friday and Saturday morning classes. Other days I can go in the evenings, but since I’m spending 6 hours chopping veggies for dinner these days, we’ll see how often I can make those.

Breakfast was the aforementioned egg bake. It was really easy: just 10 eggs, some sausage, butternut squash and sage mixed up and baked in the oven. I had frozen squash, so I used that, but I should have roasted it after thawing because it was a little bland.

For lunch I heated up leftover mini meatloaves and made some roasted potatoes. We had a green salad on the side.

I made a meat sauce with peppers, onions and tomatoes for dinner and served that over spiral carrots from Trader Joe’s. It’s a simple and satisfying dish. I think because it is something I would make pre-Whole30.

So…takeaways from today: it’s nice to have a day off from going to the grocery store; brunch isn’t Whole30 approved (boo!); if you watch Real Housewives at 9:30am you won’t be as tempted to drink during it.