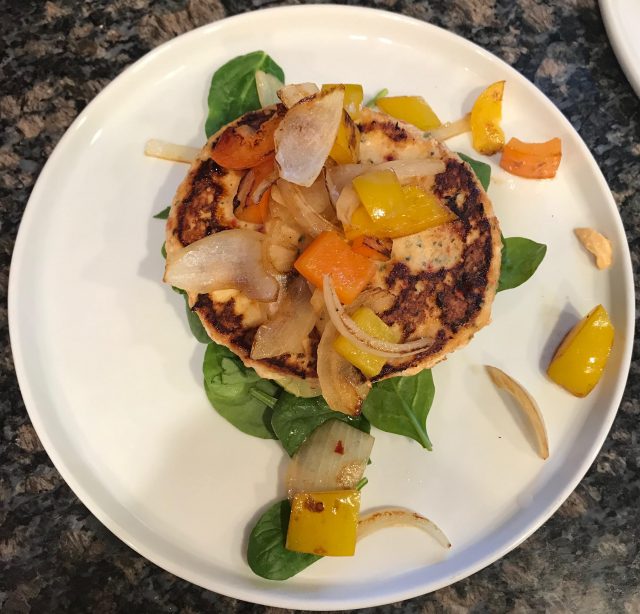 Today marks one week since we’ve reembarked on the Whole30 journey and both the hubs and I have noticed a little pep in our steps. He got up at like 6am and made coffee and bacon. I got some gainzzzz at CrossFit and then decided to rearrange the living room before even taking a shower. I’m currently looking around and thinking about which household objects I can lift over my head. This could actually be a bad thing…

Whole30-ers call this burst of energy following the detox hump “Tiger Blood.” It usually happens a little bit later– maybe like day 10 or 11– for most people. But we seem to be on the Whole30 express train on this round. I slept like a rock last night, despite gale-force winds. Normally, I would lay awake, waiting for the chimney to collapse or for a tree to fall on my car. But last night, I only pondered my imminent death for like 5 minutes before falling asleep. Winning.

Yesterday, we visited the winter farmer’s market in our lil’ city. We got some great root veggies which Biff roasted for dinner along with chicken thighs marinated in Primal Kitchen’s Green Goddess Dressing. We also picked up some locally made chorizo which seems to be compliant, perhaps we’ll have that tonight! Ole! The guy selling it was very helpful. When we asked if some kinds of sausage had sugar he said “Yeah, but just a little.” A little is too much for the Bouses! I think one of the greatest benefits of this diet is the awareness about how much sugar is in everything– even if it’s just “a little.” The Whole30 is strict about sugar. You can’t have anything with added sugar/sweetener at all. Even if it’s honey or maple syrup. But fruit is allowed, and using fruit juice is ok as long as it’s in a recipe or just a splash in some soda water (basically, you can’t guzzle a glass of OJ). Sour Patch Kids are out. Free-basing Stevia is a thing of the past. No more Vodka-Crans. 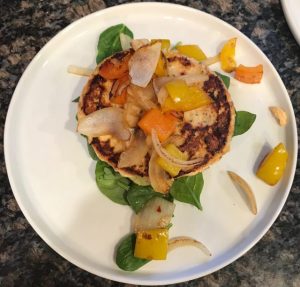 So it’s nearly lunch time and I’m contemplating what to make. We really enjoy these Chicken-Lime Burgers from Trader Joe’s. They cook up fast and go well with a bunch of sides. You will need a chisel to break them apart when frozen, but it’s oh-so-worth it. I usually treat it like a bun-less burger and serve it on spinach with mayo, mustard, and whatever veggies I have handy. In the timeless words of Rachel Ray, Yum-o! 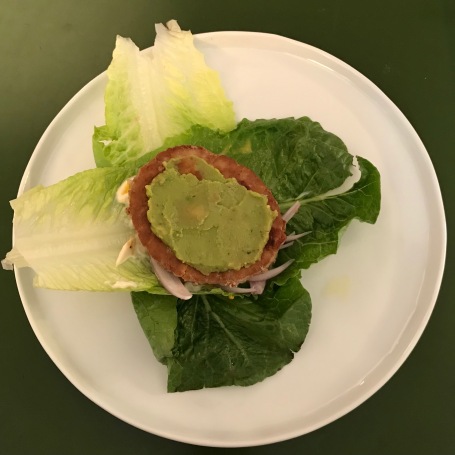 After a fun and successful dinner at a restaurant last night, today was also a mix of socialization and temptation. We had a playdate afterschool with some of my favorite moms and kids. My son gets out of school a little later than the other kids, so by the time we got there, they’d had enough time to…bake cookies! The smell was divine. It had also just started to rain and the thought of how “comforting” a cookie would be crossed my mind. But the idea was gone almost as quickly as it arrived. Witness the rewiring of my brain! I stuck with my La Croix and juicy gossip.

I did have a “first” today: a nagging, little headache. I can’t be sure if it was Whole30-related, but it didn’t go away after coffee, breakfast, tea, and lunch. So I gave in and took a few ibuprofen. It’s “allowed” on the plan though not encouraged. If I didn’t have to go anywhere in the afternoon, I might have toughed it out. But when my friends started group texting about getting Mexican food for lunch, I decided I needed to be on my A game for this playdate.

I didn’t go to the gym today. The only mid-morning  CrossFit class on Thursdays is right in the middle of when I drop my son off at school, so I can never make that. I took a wait-and-see approach to going to an afternoon/evening class. But by the time we got home from our playdate I would have had to start immediately prep dinner to fit in a workout and I didn’t have the motivation. Where’s that Tiger Blood? I’m waiting!

Breakfast was the usual variation of the lil scramble I like to make. I did not have any potatoes today, I’m trying to limit those on days I don’t workout.

For lunch, I cooked up a frozen turkey burgers and made a lettuce “bun.” It was kinda a hot mess, though it tasted good. I had to eat it in 3.5 bites before it totally disintegrated in my hand.

And dinner was better in my mind than on my plate. I made a stir-fry using some chicken I marinated in coconut aminos. I used cauliflower in the place of rice, and I attempted to use a dash of rice vinegar on in. Instead I got more like a splash. It was still ok, but not to-die-for. Some apple slices and almond butter made me feel better about it.

So…takeaways from today: it IS possible to resist fresh-baked cookies; get your head right before a playdate; always look before you dash. 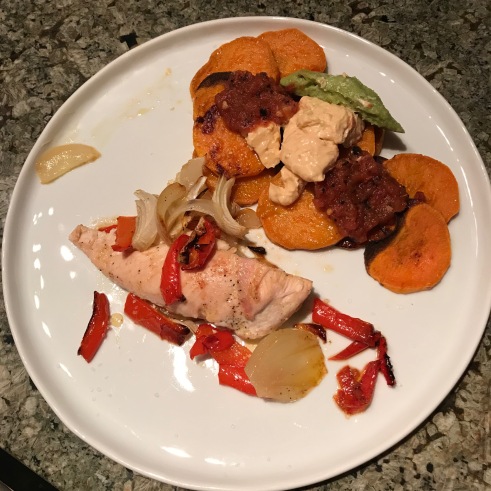 Well well well. Here we are at the halfway mark in my Whole30. It’s all downhill from here! It’s usually in days 16-18 that people will experience what’s called “Tiger Blood.” That describes a surge of energy, mental clarity, and general bad ass-ery. I thought I was feeling that a little bit yesterday but a friend who has been through the plan before says you’ll definitely know if it has arrived. I’m a little scared to wake up tomorrow.

One of the things I’m starting to grasp at this stage are all the “little” rules of the Whole30. These are the kind of rules that address more of the mental/emotional part of eating. So they can seem a little willy-nilly. For example: pancakes. Most of the ingredients in regular pancakes are not permitted on the Whole30 anyway (I guess..I don’t really know how to make pancakes. Pretty sure you need milk.) so regular pancakes are out. But you can make fake pancakes that fool no one using compliant stuff like bananas and cinnamon and mushing it all up and doing something else with it. Well, that’s a no-no too. The theory is that you’re fooling your brain, you’re feeding that “need” for pancakes. I get it. Kinda. I was a little confused yesterday when someone posted in the Whole30 FB group about his sweet potato nachos. Everyone was oooh-ing and awing and I’m like “why aren’t they telling this dude he’s a failure and needs to start over?” An admin eventually chimed in and said this was allowed because it was just sweet potato– he hadn’t combined other ingredients to mimic a chip. I’m still a little fuzzy on that one, but I figured if you can’t beat ’em, join ’em and you bet your ass I made those with dinner.

I felt great at Barbell Club tonight. We didn’t go too crazy heavy with anything, but I was sweating like crazy. Release those toxins!

For breakfast I made scrambled eggs and spinach, sausage, onions and peppers. I reheated some potatoes I made yesterday but they were a little blah. I was also trying to help my son finish his homework so I wasn’t really savoring my meal anyway.

Lunch was the rest of the Bolognese sauce from the other night. I served over some Trader Joe’s carrot noodles, of which my husband is still not a big fan. I had a pretty eventful morning of going to the dump, so I needed something quick and easy.

And for dinner I baked some chicken breasts in the oven with peppers and onions. I made the sweet potato nachos just by making thin slices and roasting them in the oven for about 25 minutes. I topped with chipotle mayo, avocado, and salsa. Ole!

So…takeaways from today: I’m awaiting my Tiger Blood; pancakes aren’t allowed but nachos are; carrot noodles hit the spot after a cathartic trip to the dump.